You are here: Home1 / About the RSO2 / Music Director

Conductor Gordon Gerrard is among the exciting new generation of music directors that are demonstrating new visions for orchestral leadership in Canada. Gordon has distinguished himself as a leader in innovative and inclusionary programming. Trained first as a pianist and subsequently as a specialist in operatic repertoire, he brings a fresh perspective to the podium that has endeared him to audiences and musicians alike.

Conductor Gordon Gerrard is among the new generation of music directors changing how orchestras work in Canada. Currently in his sixth season leading the Regina Symphony Orchestra, Gordon has distinguished himself as a leader in innovative and inclusionary programming. Trained first as a pianist and subsequently as a specialist in operatic repertoire, he brings a fresh perspective to the podium that has endeared him to audiences and musicians alike.

After an international search, Gordon was appointed Music Director of the Regina Symphony Orchestra, where he has taken bold steps reimagining the orchestra’s programming, including its Forward Currents Festival dedicated to social change and community engagement. He was the Associate Conductor of the Vancouver Symphony Orchestra for four seasons and Resident Conductor of Calgary Opera from 2007-2011. He has returned to Calgary Opera to lead productions of La Bohème, Roméo et Juliette, Die Fledermaus, Lakmé and the Canadian premiere of Mark Adamo’s Little Women, which was recorded for national broadcast on CBC’s Saturday Afternoon at the Opera. In 2019, Gordon made his debut with Edmonton Opera leading the western Canadian premiere of Rossini’s Le Comte Ory. Gordon has made appearances with many of Canada’s leading orchestras, including Toronto, Kitchener-Waterloo, and Victoria. He has worked regularly with the National Ballet of Canada, and in 2016, he made his European debut at Kammeroper Schloss Rheinsburg in Germany.

Gordon is a passionate and gifted educator. He demonstrates his commitment to education through his regular work with the young artists at Calgary Opera, the Atelier Lyrique de l’Opéra de Montréal and has spent many seasons working with students at the Banff Centre, Opera Nuova (Edmonton), UBC Opera (Vancouver) and Opera McGill (Montréal) and the Glenn Gould School in Toronto. This season sees Gordon returning to the Victoria Symphony, UBC Opera in Vancouver for Mozart’s Le Nozze di Figaro and to Calgary Opera for La Traviata. 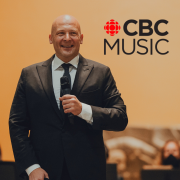 LISTEN: Gordon Gerrard, RSO Music Director was a guest host on CBC Music’s This is My Music in February 2022.
Stream the episode to learn more about the Maestro’s favourite music and personal stories of his journey as a musician.
CBC This is My Music
gordongerrard.com

The Regina Symphony Orchestra acknowledges that we are on Treaty 4 Territory, which is the traditional territory of the Cree, Saulteaux, Dakota, Nakoda, and Lakota Peoples, and the homeland of the Métis. In the spirit of reconciliation and collaboration, we commit to moving forward in partnership with the Indigenous people who live here and across Canada.

Closed on stat holidays and Friday afternoons in the summer