Rosemary Thomson returns to Regina to lead the Regina Symphony musicians and the special guests from the Brandon University String Program. Strings will shine with the energetic Shaker Loops, the American folk dance-inspired spirit of Strum, the lively suite from Holst and the luminous Vaughan Williams fantasia.

Click the button below to purchase tickets to this concert or a season subscription to the concert series. 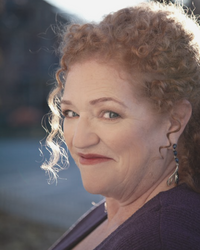 Equally at home conducting opera, symphony, choral and contemporary music, Maestro Thomson has enjoyed a robust guest conducting career on podiums across the country, including the Edmonton, Kingston, Niagara, Regina, Toronto, Vancouver and Victoria Symphonies, Calgary, Highlands and UBC Opera. She received a Dora nomination as Music Director of the World Premiere of Shanawdithit for Tapestry Opera. Maestro Thomson conducted for Vancouver Opera in April, Opera Kelowna,'s mainstage performane in August, and will make her Canadian Opera Company debut in 2023.

A passionate teacher, Rosemary has been on faculty for Opera Nuova for 15 seasons and joined the faculty this summer at The Banff Centre for the Arts, Opera in the 21st century program. She plays a prominent mentorship role in Tapestry Opera's new Women in Musical Leadership program. In 2021 Ms. Thomson received the provincial Community Spirit Award from the province of BC recognizing her leadership in the Okanagan community.

Rosemary lives in Kelowna with her two teenage children and her husband, Dan who willingly attends the opera with her in exchange for company at CFL games, especially the Hamilton Tiger Cats

The Brandon University String program, led by cello professor Dr. Leanne Zacharias and violin professor Kerry DuWors, has welcomed students from across Canada, Mexico, Belize, Puerto Rico, Brazil, China, South Korea and the USA into the BU School of Music’s strong tradition of string pedagogy and performance. Featuring over $20,000 in annual string-specific scholarships, the program also boasts an impressive instrument bank operated in partnership with the Manitoba Arts Council. Students in the BU string family are active within all of the university’s large ensembles, as well as in collaborations with choirs, chamber music ensembles, the new music ensemble and with student composers.

Performance tours have taken the group through Western Manitoba together with the BU Chorale in 2019, across Saskatchewan and Alberta in 2013, to the Winnipeg Symphony Orchestra’s Mahlerfest in 2015, and a collaboration with the Pembina Valley Strings in 2016. The BU Strings are thrilled to return to live performance and touring, and for this opportunity to share the stage with the Regina Symphony Orchestra.

The Regina Symphony Orchestra acknowledges that we are on Treaty 4 Territory, which is the traditional territory of the Cree, Saulteaux, Dakota, Nakoda, and Lakota Peoples, and the homeland of the Métis. In the spirit of reconciliation and collaboration, we commit to moving forward in partnership with the Indigenous people who live here and across Canada.

Closed on stat holidays and Friday afternoons in the summer