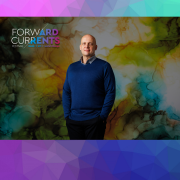 Queer voices possess extraordinary power. They challenge us to examine our lives with fresh perspectives, they inspire us with their resilience, and they lift us up with the unwavering strength of community. The Regina Symphony Orchestra’s Forward Currents Festival is an opportunity for us to lend our platform to these visionary artists from the LGBTQ2S+ community. The festival aims to present ideas and issues that are socially relevant to those of us who live here, to spark conversation, and ultimately to create consciousness about the choices we make. Through these everyday choices, each of us has a hand in determining the kind of community we live in.” 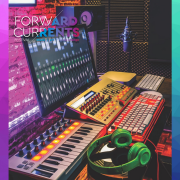 The students of the Communication Media Arts Pathway at Scott Collegiate are producing an audio media project with the Scott Rainbow Alliance.

Scott Collegiate students will tell their stories about identity, love, experience, and community – sewn together with the common thread of location. Who we are – whether alone or as a group – is connected to where we are or where we come from.

The Media Arts students will emphasize this idea further by “placing” the different stories heard around the audience, hoping that they will in turn think about who and where they are, connect their stories to the students’ and feel the bond of community with new voices, new perspectives, and the location of mâmawêyatitân centre.

The RSO would like to thank the students, and their teacher Jeffrey Looysen, who is also a member of the RSO violin section, for creating this audio experience for our festival.

Presented in Partnership with UR Pride

CONCERT: THE BOOK OF MY SHAMES

UR Pride Centre for Sexuality and Gender Diversity is a non-profit organization based in Regina. UR Pride is proud to offer services, supports, resources, and programming to not only 2SLGBTQ+ and allied students at the U of R, but anyone who is a part of, or spending time in the Regina community.

THE BOOK OF MY SHAMES

BELL The Book of My Shames

The Book of My Shames is hard to write about. Partly, this is because we already state our case as clearly as we can within the piece. Mostly, though, it’s that the show is like one of those paintings where the painted area only serves as background to a blank space in the middle — a blank space that forms the shape of the actual subject. Ostensibly, our show is made up of a series of episodes from my early life, but it might not be most helpful to think of it as a coming-of-age story, or in fact as a narrative at all. We call it “The Story of a Hole”, but it might as well be called “Thirteen Ways of Looking at a Hole”; The Book of My Shames is not really about the anecdotes that it comprises, but about the blank space they all point to — a black hole whose gravitational pull distorts all activity around it.

I hope that doesn’t sound too pompous or confusing, but if it does it may only be because, in my experience, we are much more used to talking about what a person is or does than we are to wondering what it must be like to be that person — even though it is the experience of living in our particular bodies that gives rise to all our particular behaviour.

Sean Guist and I first had the idea to develop a conversation around this after I premiered an autobiographical song (a piece that later came to anchor this show) at Sean’s OUTstages Festival in Victoria. I had never intended to sing the piece myself, but when the original performer couldn’t do it, I let Sean gently bully me into presenting my own work — something I was very uncomfortable doing at the time.

In the response to the performance I instantly noticed a gap between my understanding of the piece and what others seemed to be taking from it. Most striking was the difference in empathy; audience members seemed to have much more compassion for the suffering of the young person in the story than I had, either at the time of the experience or in writing of it many years later. I could only see weakness and compulsion.

It’s surprising how long it has taken me to understand that my self-image doesn’t always correspond with how other people see me. Surprising because, as a performing artist, I spend a lot of time thinking about how I’m seen. It’s like the old joke: an old fish swims by two younger fish and says “Morning, boys… How’s the water?” One young fish turns to the other and says, “What the hell is water?” The element that we swim in, the lens through which we see everything, is the hardest thing to recognize. That’s what shame has been for me. That’s why it’s so hard to talk about, and that’s why this piece isn’t really a story; you can’t have a story where nothing changes. I hope you can look into and beyond these personal reminiscences, to the invisible force that shapes them. I believe these forces — shame for me, something else equally pervasive and nebulous for you — pull the strings in all of our lives, and usually only at the edges of our awareness. And that’s interesting.

Isaiah Bell performs across North America in opera and oratorio, his work characterized by his “beautiful tenor, command of style, and natural stage presence” and a “strong, glorious voice with its heroic, oratorio-style ring”. He is also a composer, a writer, and a poet. Recently he has combined these disciplines in his critically acclaimed touring solo show, The Book of My Shames; in the performance on film of his original translation/adaptation of Poulenc’s solo opera La voix humaine (a “finely tuned performance, so perfectly married to his own sensitive and intelligent adaptation” – Opera Canada); and in hybrid concept recitals across Canada. Previously Isaiah starred in the premiere of Rufus Wainwright’s Hadrian at the Canadian Opera Company, and Mark Morris’ production of Curlew River at the Brooklyn Academy of Music (“a performance of exquisite poignancy” – The New York Times) and has appeared with the Edinburgh Festival, the Toronto Symphony, the National Arts Centre Orchestra, and at Lincoln Center. His upcoming season includes world premieres at Opéra de Montréal and Carnegie Hall.

Co-Creator and Director of The Book of My Shames, Sean Guist is Co-Artistic & Marketing Director of Intrepid Theatre in Victoria, BC/Lekwungen Territory. Administrator by day and queer artist, producer and director by night, Sean is the founding Curator of Intrepid Theatre’s OUTstages queer theatre festival, and has created new residency programs for local artists, and fostered new work through cabarets, emerging artist programs, and mentorship opportunities. Recent directing credits include readings of Sunday in Sodom (Belfry Theatre SPARK Festival), The Empress (Theatre Outre), Tom at the Farm (Puente Theatre) and productions of Side by Side Sondheim and Down Dangerous Passes Road (independent). Sean can be seen on drag stages as the bearded queen, Woofie, and has created queer events in non-traditional queer spaces like the sold-out drag show hit, Drag, Queers & Beers at Phillips Beer.

Kolby Zinger-Harris is a composer, arranger, music producer, and musicologist based in Toronto, ON. Kolby completed a Bachelor of Music specializing in Composition at the University of Toronto, having studied with Gary Kulesha, James Rolfe, and Norbert Palej, as well as a Master of Arts in Musicology, also at U of T. Their original works have been performed by such ensembles as the Okanagan Symphony Orchestra, the U of T Opera Company, and the Cecilia String Quartet. Kolby is also a composer on the independent video game Waterboy from Gremshak Games.

Juno nominated Cris Derksen is an Internationally respected Indigenous Cellist and Composer. In a world where almost everything — people, music, cultures — gets labelled and slotted into simple categories, Cris Derksen represents a challenge. Originally from Northern Alberta she comes from a line of chiefs from North Tallcree Reserve on her father’s side and a line of strong Mennonite homesteaders on her mother’s. Derksen braids the traditional and contemporary, weaving her classical background and her Indigenous ancestry together with new school electronics to create genre-defying music. As a performer Derksen performs nationally and internationally as a soloist and in collaboration with some of Canada’s finest, including Tanya Tagaq, Buffy Sainte Marie, Naomi Klein, and Leanne Simpson, to name a few. Recent concert destinations include Hong Kong, Australia, Mongolia, Sweden, and a whole lot of Canada: the place Derksen refers to as home.  A new album of Cris Derksen’s works will be released in 2022.

The Queer Songbook Orchestra (QSO) are a Toronto based 13-piece chamber pop ensemble, dedicated to exploring and uplifting 2SLGBTQ+ narrative in pop music. With the queer lens intact, they look through the last century of popular music and bring forward obscured 2SLGBTQ+ historical narratives, alongside the personal reflections from members of the community. By working with a base of known songs that are uniquely reimagined for the ensemble, the listener is offered new points of entry into familiar works and a broader perspective on the universality of human experience. A highly collaborative project, the QSO incorporate members of the local community to participate in every performance. From high school students to elders, and from
well-known artists to novice performers, individuals are invited on stage to co-present these narratives, and to foster dialogue and nurture deepening community. 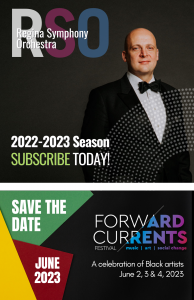 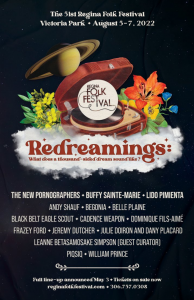 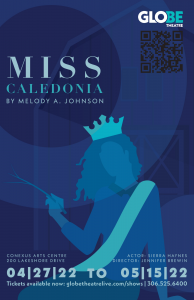 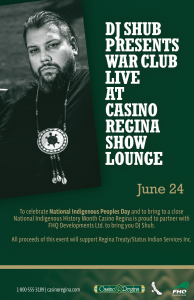